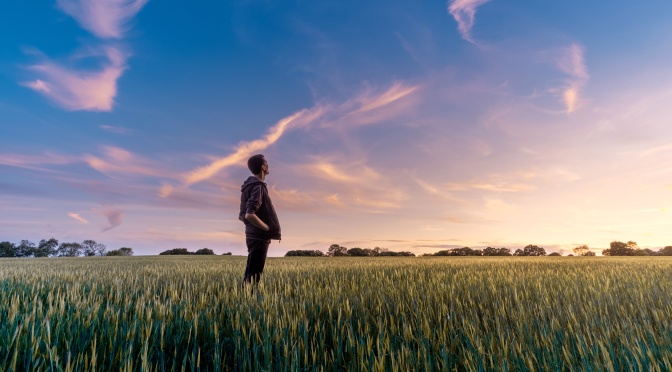 “I came that they may have life, and have it abundantly.”

There was once a young man who sneaked into church hoping nobody would notice him. The only reason he’d come was because he was keen on a girl who sang in the choir, and he hoped that if he was in the service he’d be able to see her at the end of the service and ask her out. He wasn’t quite sure what to do, but he saw people going in and sitting down, so he did the same. Just as the service was beginning, an usher came up to him.

‘Excuse me.’ he said. ‘The person who’s supposed to do the reading hasn’t turned up. Could you possibly do it?’

The young man was horrified for a moment, but then thought quickly. The girl he had his eye on was there, in the choir. She would be most impressed if she heard him reading in the service.

‘All right,’ he said. He took the Bible and looked through the reading the usher had showed him.

It came to the moment. He want up, opened the Bible, and began to read. It was from John’s gospel and he vaguely recognised it.

‘Anyone who doesn’t enter the sheepfold by the gate,’ he heard his own voice say, ‘but climbs in by another way, is a thief and a bandit.’

He was thunderstruck. This was what he’d done! He was standing here, pretending to be a regular bible-reader, when in fact he’d only come in to meet a girl. He forced himself to go on, aware of his heart beating loudly. If he was a bandit, coming in under false pretences, what was the alternative?

‘I am the gate for the sheep,’ said Jesus. ‘The bandit only comes to steal, kill and destroy. I came that they might have life, and have it full to overflowing.’

‘Is it true?’ he asked. ‘Did he really come so that we could have real life, full life like that?’

‘Of course it is,’ he replied, quite unfazed by this non-liturgical outburst. ‘That’s why we’re all here. Come and join in this next song and see what happens if you really mean it.

And the young man found himself swept off his feet by the presence and the love of Jesus, filling him, changing him, calling him to follow. He got more, much more than he had hoped for.

For those of us reading Acts (find out more), today we read Acts 3 and meet a man who also gets more than he hoped for. The Bible I usually use calls him a crippled beggar, but I wonder if we’d give him more dignity, and ourselves greater understanding, if we called him a vulnerable person?

Ignored and forgotten by the state;
marginalised by society; discriminated against;
someone who has not fit the criteria for support through the social care system?

Carried into the temple by some people who chose to help (or wanted to make themselves look good? – who knows!), this vulnerable man comes hoping someone will take pity on him, and give him a few coins, enough to keep him going another day.

He sees Peter and John. And they don’t give him what he’s hoping for, they give him something better. An encounter with Jesus the healer, the transformer, the Saviour.
More than he expected or hoped for.

What are we expecting or hoping for today?

As we continue to look towards the easing of lockdown, what are you hoping this time will teach you, us, society?

How can you use your voice today to stand up for the marginalised and vulnerable?

I leave you with a short video a family member sent me, which I found help me think more carefully about the world we might hope 2020 will help us and all the world create.

if you’ve got thoughts or something to share you can comment below and share them with us all – I’d love to hear from you, and I know others would too!