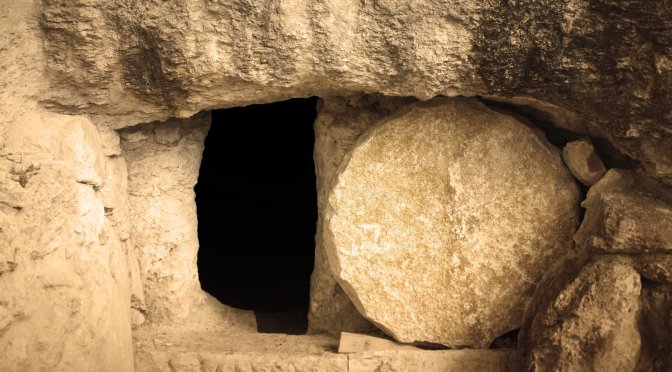 Leader: He is Risen Indeed!

Response: Is he really?

Response: I thought he was dead?

After the sabbath, as the first day of the week was dawning, Mary Magdalene and the other Mary went to see the tomb.

As Jesus was crucified Matthew tells us that many women who had been following and providing for Jesus looked on from a distance (Matt 27:55). Two days later, under the dim light of dawn some of them head towards the tomb.

These women were grief stricken, devastated, broken-hearted – having watched the one they’d followed and provided for taken from then, beaten, mocked and killed. And not just killed, but killed under the painful cruelty of crucifixion.

I wonder if those women felt lost, no longer having Jesus to follow and learn from. I wonder if they felt as if they’d lost a sense of purpose, their vocation of providing for Jesus so brutally taken from them. I wonder how they felt now that Jesus was no longer alive. The one who had shown acceptance, compassion and love to these women was gone. I wonder how they felt, with the prospect that they may never be accepted and loved by someone else in that way again.

As they approach the tomb, they expect the stone to be there, sealing Jesus’ body in. They perhaps expect the guards to be there. What they don’t expect, is for the earth to tremble and shake and an angel appear before them, in bright light and dazzling white and roll the stone away – and then take a seat (Matthew 28:2-3).

Matthew’s storytelling makes me smile. All that drama – light, earthquake, stone rolled away – and then what does the angel do? They sit down. Just needs a pot of tea and scones for a truly English picnic (with proper social distancing of course!).

But the angel said to the women, ‘Do not be afraid; I know that you are looking for Jesus who was crucified. He is not here; for he has been raised, as he said. Come, see the place where he lay. Then go quickly and tell his disciples, “He has been raised from the dead, and indeed he is going ahead of you to Galilee; there you will see him.” This is my message for you.’

In that moment, I wonder what those women felt. Joy or terror? Hope or disbelief? Maybe they did accept the angels invitation and look into the tomb and see it was empty. But did they believe the impossible could have happened? Did they believe this dazzling angel – sat on a stone – was telling the truth?

Suddenly Jesus met them and said, ‘Greetings!’ And they came to him, took hold of his feet, and worshipped him. Then Jesus said to them, ‘Do not be afraid; go and tell my brothers to go to Galilee; there they will see me.’

But that’s not the only tale that goes on to be told. The guards, they’ve already headed off to the authorities to report, and another story is soon devised to explain the unexpected events – blame the disciples, say they came in the night and took the body (28:11-13).

And for Matthew’s story (which like Mark, has very little resurrection story to tell compared with Luke and John), even when the other disciples do see Jesus and worship him some still doubt. Could this resurrection thing really be true? And what does it really mean for the future?

When we travel through Lent, and then Holy Week, Easter Sunday is often the end point, the climax, the destination. It’s the place we know we’re going to get to at the end of the pain and suffering. And generally, as soon as dawn breaks – where there.

But for the disciples, for 1st Century Palestine, it’s wasn’t so cut and dried. Resurrection wasn’t such a given. There was doubt, uncertainty and fear. There were multiple stories and little resource to tell the difference between them.

For Jesus’ first followers, and for 1st Century Palestine, the Resurrection was not a one day event. It didn’t arrive for the whole of society as dawn broke, but took time to be known, experienced and believed – if indeed it was believed at all.

We know the truth of the resurrection. We live the truth. Jesus Christ is Risen – He is Risen indeed! Alleluia!

Due to Covid-19, there is an inevitability that for many of us, while knowing the truth, Easter Sunday will feel odd, different & strange. It may be hard to hold onto the truth in the isolated living we currently experience.

I think it’s worth reminding ourselves that rather than a one day even, Easter is a period – a season – which takes us from today all the way to Pentecost (this year 31st May). A season of entering into the new of the resurrection, where the discovery of the hope of new life is allowed time to be fully known, realised and experienced.

Perhaps this year we experience the resurrection more like Jesus’ first followers did, and more like the Easter season invites us, not as the dawning of a one day event, but one that takes time for us to fully realise. One where we embrace the wonderful and life changing truth of the resurrection of Christ, the truth that sets us free, while waiting to discover the full impact of the resurrection to come.

They wait, and we wait, for when our resurrection from lockdown comes.

All the while knowing the truth which sets us free.

Jesus Christ is Risen – He is Risen indeed – Alleluia!

if you’ve got thoughts or something to share after reading and reflecting on my thoughts, you can comment below and share them with us all – I’d love to hear from you.